The word only exists in Portuguese.

It describes the state of cheerful melancholy. No other language has a term for it and no other people live out this feeling with as much joy in sadness as the Brazilians. But how do you photograph a feeling? By putting the camera aside and listening to the people. You can even do this during the hustle and bustle of a football World Cup – or perhaps only there.

The photographs were taken during the 2014 World Cup in Brazil.
Our blog Brafus2014 (with Kai Schächtele and Birte Fuchs) was voted second in the category Sport in the election of the Journalist of the Year, organized by Medium Magazin. 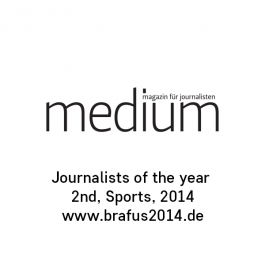 All photo stories shot during World Cup.
A country awakening?
Football Fan Culture at Euros and World Cups since 2006.
Exhibiting my work at the Freelens Gallery as a satellite of Phototriennale Hamburg 2018.
Cookies are used on my website. By clicking “Accept”, you consent to the use of ALL the cookies.
SettingsRead MoreACCEPT
Privacy & Cookies Policy