It’s impossible to travel to a World Cup in South Africa without going to Brazil too. So in spring 2014 we decided to take a look behind the scenes of the 2014 World Cup, this time together with our journalist friend Birte Fuchs.

During the Confed Cup in June 2013, two million Brazilians took to the streets in protest. Their slogan for the six weeks during the Cup was: We have nothing against this World Cup. But we want our schools and hospitals to also meet FIFA standards. So this mega event will be played out on two stages. On the one, the Brazilian government wanting to demonstrate that Brazil has become a member of the elite club of industrialised nations. On the other, many people of Brazil will be showing that they have emancipated themselves from the Establishment and are articulating the need for their interests to be considered. But nevertheless there will also be many Brazilians who simply carry on living their daily lives: going to work as usual and watching football in the evening.

In the election of the Journalists of the Year, organised by Medium Magazin the following year, Brafus 2014 was voted second in the category Sport. 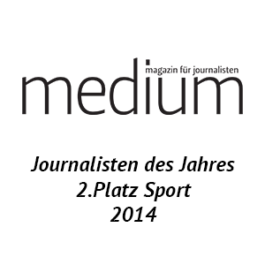 Who are these people? What does their everyday life look like? How does it feel to be segregated and divided in the many different classes? – that’s what we wanted to find out.

Our blog www.brafus2014.de took us in six weeks from São Paulo to Rio de Janeiro and provides insights into a society that finds it hard to put up with millions being invested in stadiums, while schools don’t even have enough money for books, while their health stations and services are underfunded.

In this six weeks we produced fourteen multimedia articles with audio or video clips, eight regular posts, 5 video reports and, of course, one photo-film. Kai and Birte had quite a few radio interviews and I shot about 5.500 photos.

Basic principle of the blog are posts with integrated multimedia elements. Texts, videos, audio clips and photo-films function as integrated modules of an article and thus become part of the whole story. Most films are a combination of video interviews augmented with photographs of the respective situation. In one blog post we have juxtaposed two video interviews on the same question.

After having had to cancel the cooperation with a major German publisher, as they were unable to raise our estimated minimum financing for the six weeks of blogging from Brazil, we went on our own.
With support from two partners, the journalism network torial and the South America travel specialist Viventura, a VG Bildkunst grant and for the most part through live-crowdfunding and crowdtravelling: 137 supporters who were willing to pay for independent journalism past publishers and who are listed on our Paid Wall, and through the generosity of Brazilians we were allowed to stay with during the trip. You can find an article about our enterprise on torial and another one on meedia.

Our Paid-Wall and Travel Expenses

We published all our expenses from bus rides to drunken Caipirinhas as well as all our earnings including our crowd funders and their comments.

Our Supporters about us

Great article! It describes so well the problems our world has... How unjust it is for many and how difficult it is to remedy these injustices or how many suffer from them without really being able to do much. It is a pleasure to read your stories and I think it is great that they are told and published! „KAJA“
Hello, you three, here's a greeting from Berlin. I've been following your fantastic site the whole time. Actually the only thing that interested me in this World Cup. Yes, I admit I watched the final and I can understand that the euphoria is contagious. Otherwise I am an absolute anti-football fan. To say that, ohh ohh ohhh ohhh, you had a hard time with that in the last 4 weeks. But I really liked your site. Very informative, versatile and finally something about normal life, the everyday life. I also found the articles very well written. Many thanks for that Monika from Berlin (69 years old)
Great ending for a fantastic project! Thank you very much for the very interesting insights into a country that has been so strangled by FIFA! You can be really proud of yourself. The fact that on top of the exciting insights and wisdom you will take with you, that you have also financially managed everything so sovereignly puts the icing on the cake. Respect and congratulations from Kreuzkölln! Benno
Oh, it's almost as if I was there. Thanks for that report. The Rastas of Praca 7, the Lanchonete, the political actions ... have fun in Minas Gerais! Liviana

A Selection of our Films

“… Here we oblige the children to go to school. Those who don’t go to school or look for work cannot stay here. …” (Part of the article Day 11: The fight at Cine Marrocos)

“One day, a thief attacked us. But when he arrived and saw there was nothing, not even food, he was so sorry he went to the market to collect food and brought it to us.”

“To this day, I have often tried to learn But I can’t do it… Sometimes I see people studying. I think that’s nice. I had a dream that one day I would have an education. But it’s impossible. “

A litte gentleman and his nerves

And finally: a photo film about a “Seleção” in a penalty shootout.

Looking behind the scenes of the World Cups in Russia, Brasil and South Africa and the Climate Change Summit in Paris.